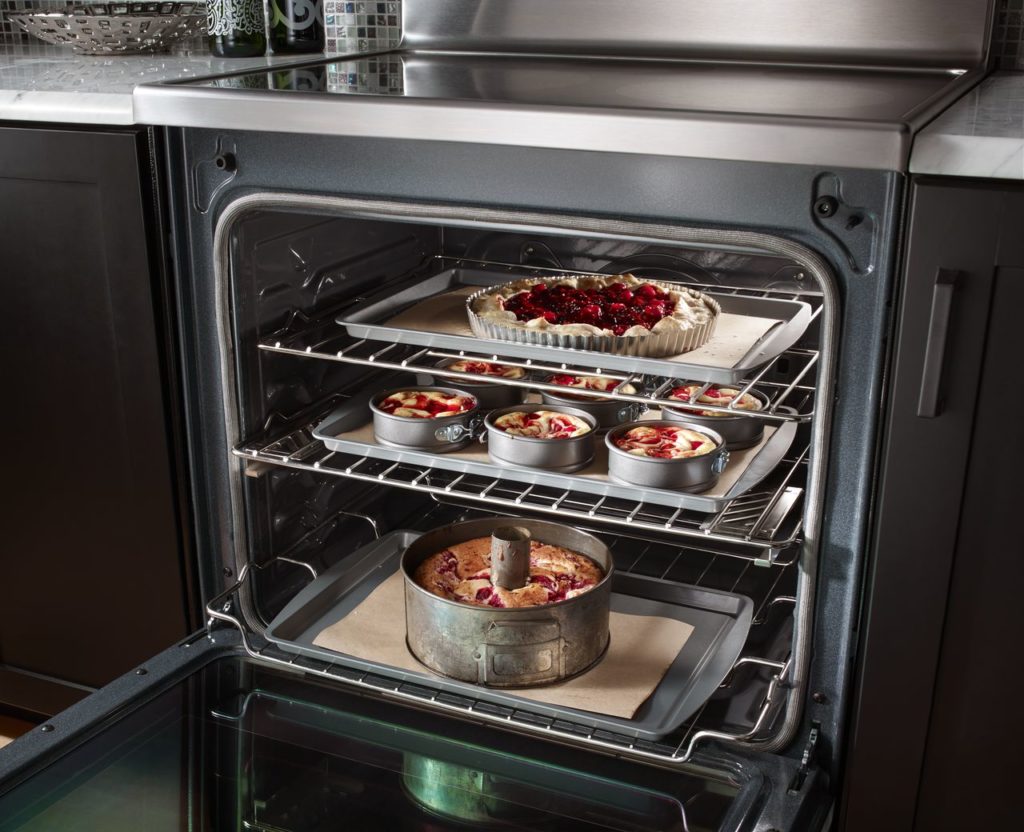 Convection ovens continue to be one of the hottest trends in home cooking. But what makes it so special? Traditional radiant ovens use elements or gas to generate heat inside the oven cavity to cook your food, and it’s imperfect at best. Depending on the location of the elements and the size of your oven, your food may cook unevenly, and you may have to contend with cold spots that just don’t heat up the way you want them to.

Convection ovens take home cooking to the next level. Using a fan and exhaust system, convection ovens circulate hot air inside the oven cavity and remove moisture at the same time.

So why is that such a big deal?

Convection ovens typically cook 20% – 30% faster than traditional radiant ovens. The circulating air moves through the oven cavity quickly, preheating in less time and cooking more efficiently. It’s recommended that you check your dishes often, especially towards the end. Because convection cooks much faster, you’ll need to assess the look and smell of your food for readiness rather than depending on your timer.

One of the best things about convection is the ability to cook multiple items at the same temperature and consistency anywhere in the oven. You’d never be able to bake 3 trays of cookies at the same time in a traditional oven, but in your convection oven you’ll have 3 trays of perfectly browned cookies every time.

And because a fan is circulating the air throughout the oven cavity, you don’t have those cold spots, that inconsistency that can ruin your meal. In higher-end models, a True convection system is used. In True Convection (also called European Convection), a third element placed by the fan heats the air evenly before it is blown into the oven, guaranteeing consistent cooking temperatures every time.

Remember, convection cooking is all about cooking with moving air, so use baking sheets and roasting pans with lower sides to allow for air circulation and don’t overcrowd your oven or you’ll reduce the effectiveness of the fan.

Nothing browns food quite like a convection oven. The hot air blowing over the food surface will cook the inside of the dish faster and at a higher temperature than the radiant heat. As the exhaust system pulls the moisture from the air; the sugars in your vegetables will caramelize and brown, the fats in your meat will render and create moist, succulent meals with a crispy brown skin, your pastries will be flakier than you’ve ever seen and your roasted potatoes will be perfectly brown and crisp on the outside and fluffy soft on the inside.

Convection ovens cook faster and more efficiently. Simply put, you won’t run your oven as long and you won’t have to turn it up as high as a traditional oven. In fact, a good rule of thumb is to reduce the suggested cooking temperature by 25 degrees Fahrenheit.

Sounds too good to be true, right? There’s more. Because convection is a feature on your oven, you don’t have to use it. If you’re new to convection cooking and you want to experiment, you’ll have the choice to use it or not. Take your time, and before you know it, you’ll be perfecting browning Holiday meals like a pro.

So, what are you waiting for? Head on over to our store where one of our experts will walk you through our selection of convection ranges and wall ovens.